Documentary revolves around actor’s 2014 return to the boxing ring in Moscow. 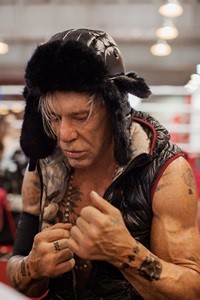 The film, which is in post-production, follows actor and retired boxer Rourke as he prepares at the age of 62 to take on a fighter half his age in a special boxing exhibition in the Russian capital, after a 20-year absence from the ring.

A few days before the fight, Rourke’s beloved dog Guapo dies, plunging the boxer into a mystical state for his comeback fight.

Aujard, who is a long-time acquaintance of Rourke, captures the actor-boxer as he looks back over his life and career.

“The film will be ready for this summer,” said Versatile co-chief Pape Boye. “It’s very cinematic but one of the things that makes it particularly interesting is that Richard Aujard and Rourke are extremely close. They’ve known one another for 30 years and that creates a level of intimacy between the two. It has enabled Aujard to capture another unexpected side to Mickey Rourke. We see the fragility behind the tough guy.”

Aujard is best known at home and internationally for his photography work focusing on the world of sport and celebrity as well as world cultures, including Native American tribes and the Charro horsemen in Mexico.

Paris-based Bonne Pioche Cinéma, which also worked on March Of The Penguins, The Fox And The Child and Once Upon A Forest, is producing the documentary with Cantos Bros Productions, the Marseilles-based production company of footballer-turned-actor Eric Cantona and his brothers Jean-Marie and Joël.

Other titles on Versatile’s Cannes slate will include Australian director Chris Peckover’s suburbia-set home invasion horror-thriller Safe Neighborhood, for which it will show a first trailer.